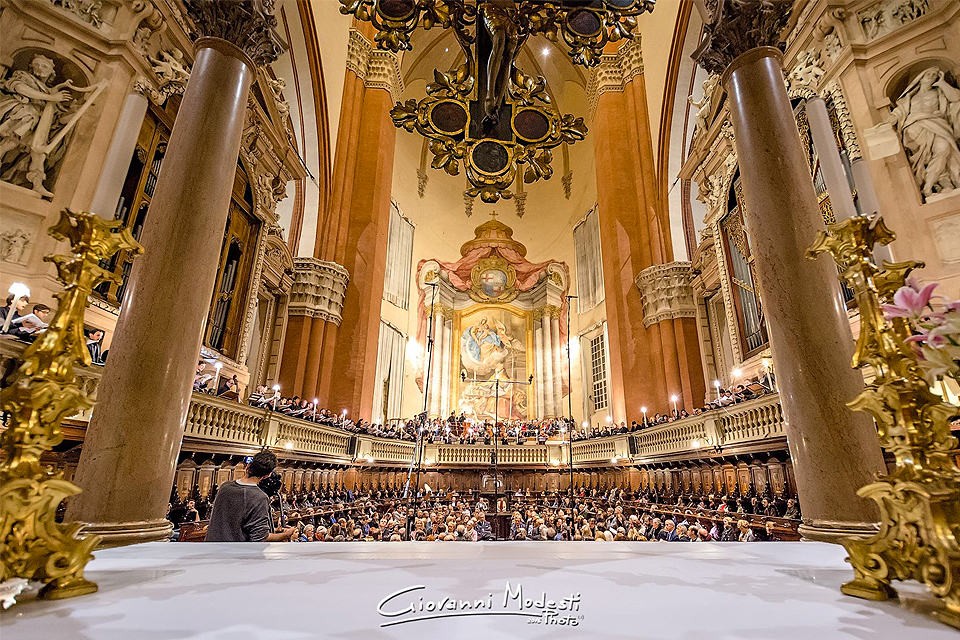 The Messa in Musica Cultural Association, formed in September 2014, chose to develop its activities around the performance of sacred musical works in sacred settings or places that are anyway of artisticarchitectural
significance. The peculiarity of the Association lies also in its ability to combine other art forms, such as dance and poetry, with music.

The association was created with the aim of filling a cultural void. Bologna, UNESCO creative city of music with more than 300 musical events, like many other places in Italy was lacking a sacred music festival to provide the opportunity to hear the masterpieces in this repertoire within the setting of sacred places. The activity of the Association is characterised also by the excellence of the musicians. Musicians are selected time by time for their dedication, professionalism, and renown in the context of our area.

From 2014 to date “Avvento in Musica” has produced twenty-five titles of scared music, from the better-known masterpieces such as Petite Messe Solemnelle by Rossini, Missa Papae Marcelli by Palestrina (Missa pro Papae Marcelli) and Mozart (Coronation Mass) to exceptionally rare pieces by contemporary composers (Misa Criolla).

The aim, among others, is to recover the power of a tradition that was deeply rooted in the Christian/ Western culture that underpins our society.
The Association has extended its actions, participating in the initiatives promoted by the Bologna City Council Culture Department with projects such as “Concerti in Abbazia” and “L'inno alla gioia”, with live music and original dance choreography. The projects carried out in this context were all crowned with success. Messa in Musica was therefore also able to promote the cultural legacy of outstanding locations in the Bologna area.

In October 2020, the feast of St. Petronius, patron saint of Bologna, was celebrated by the presentation of a new work specifically commissioned by the Association from maestro Marco Taralli (1967), which was performed and offered to the city in co-production with the Bologna Municipal Theatre, which readily adhered to and shared the important project created by the Association.

The Mass for Saint Petronius was first presented to citizens and sponsors, and then performed in the Basilica during the religious function, thus renewing a tradition that had been gradually abandoned in our country, over the years, despite the wealth of the repertoire of sacred music, especially of Italian origin, which had always been a part of liturgical practice in the last millennium.

Celebration of the Mass accompanied by the performance of a complete and original opera, which includes parts of the Ordinary (Kyrie, Credo, Sanctus, Benedictus, and Agnus Dei) was also an opportunity to renew, from the artistic perspective, the depth of secular spirituality, which is deserving of recovery and rediscovery, also through the immensely evocative nature of the Basilica of Saint Petronius, site of the most important religious and civic events of our city.