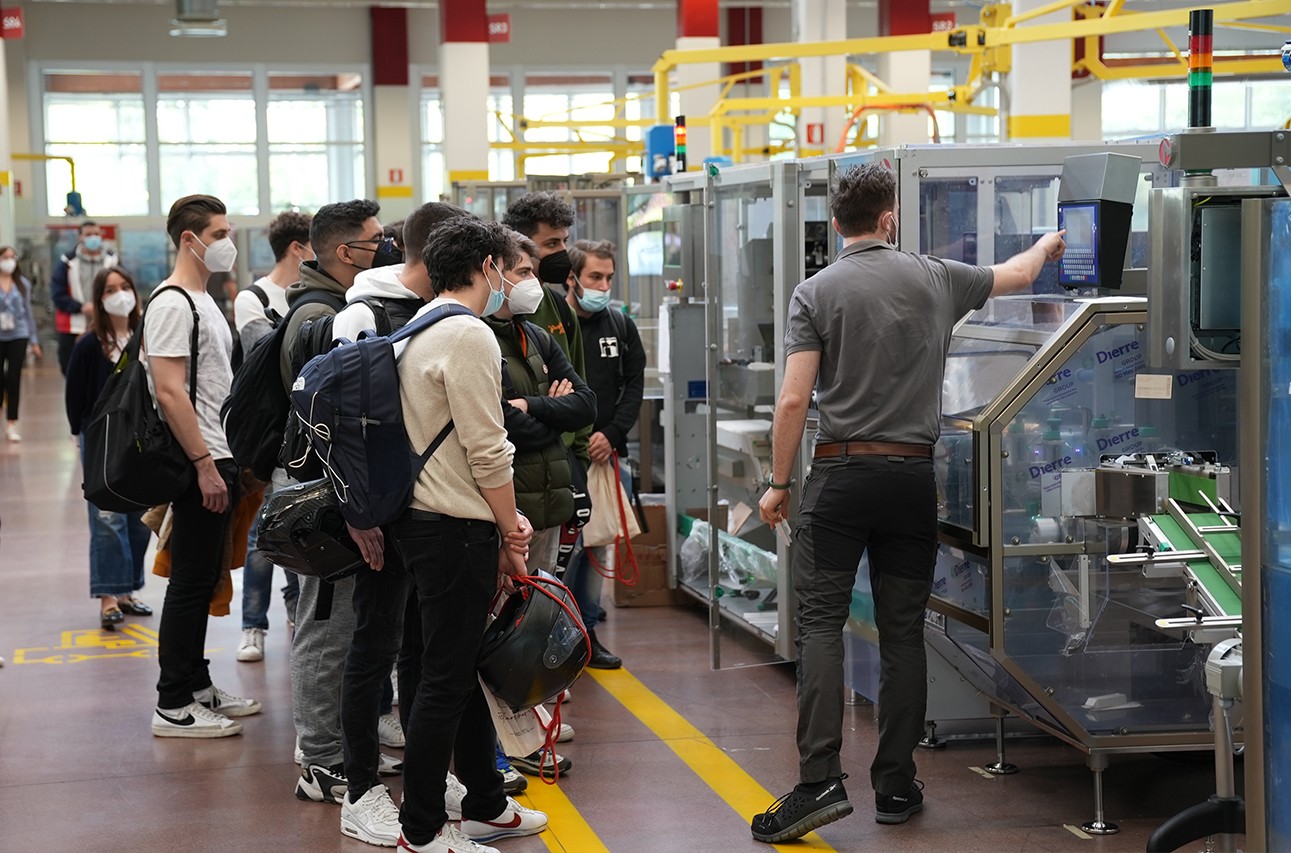 In a world of work which is ever-increasingly competitive and hyper-specialised, early orientation of new talent plays a key role which deserves ever-greater attention. This is the pervasive mantra at Marchesini Group’s Talent Open Days: five days – from the 9th to the 13th of May, the culmination of two weeks of events which have opened the company’s doors to customers from all over the world – dedicated to welcoming 600 students and teachers from middle schools, technical high schools and universities, both in Bologna and the rest of the Emilia-Romagna region and Italy as a whole, with the goal of showing them the complex mechanisms which make a large company function and thus provide a link between education and putting those studies into practice.

After a welcome by Valentina Marchesini, HR manager at Marchesini Group, the students and teachers will be guided along thematic paths by young ambassadors trained in STEM areas who were hired and hold various roles in the company, from the creation of industrial software through to fine tuning of internal logistics. The company is thus explained using a peer-to-peer approach which is able to simplify the enormous range of technologies designed within Marchesini Group and make them more accessible.

Key moments of the tours will be visits to the Pharma and Beauty plants in Pianoro (Bologna), where the machines for packaging of pharmaceutical and cosmetic products are assembled – a business which allowed Marchesini Group to achieve a consolidated turnover of 490 million Euros in 2021, growth of 9.1% compared to 2020.

“I will never stop pointing out that technical high schools are not second-rate institutions: at Marchesini Group, we take on more than a hundred young people every year, who are hired on permanent contracts and immediately have the possibility to build themselves a future,” explains Valentina Marchesini. “Certainly more traditional educational routes and the arts are important, but we have to stop guiding students with innate technical inclinations towards paths which are considered loftier in social terms. It is in part due to this distorted mechanism that enterprise, especially in our field, struggles to find the people and skills it needs.”

The Open Talent event will also see the inauguration of a Scientific technical committee, made up of ten lecturers and teachers from universities and technical high schools in areas where Marchesini Group has plants (Unibo, Unifi, Unisi, Salesiani Bologna, ITS Tullio Buzzi in Prato, Itis Leonardo da Vinci in Carpi, Aldini Valeriani in Bologna, Ettore Majorana in Bologna) and training experts: the goal is to instil in them a constant dialogue on the educational pathways of young people joining the company. The committee thus becomes the guarantor of Talent Garage, Marchesini Group’s corporate academy which, among other things, has allowed 40 employees to obtain the prestigious MBA at Bologna Business School since its foundation in 2020.

Finally, during the course of the company tour, students who wish to will also have the opportunity to leave their CV and talk to the Group’s recruiters. In the end, they will be asked to share their impressions of the company: people often talk about the ideal candidate, but rarely about what the ideal company should be like. For Marchesini Group, Open Talent Days is therefore the chance to make itself known to young talent in the area, and at the same time to take notes from them on how the company can position itself with regard to the personal and professional prospects of the younger generations.