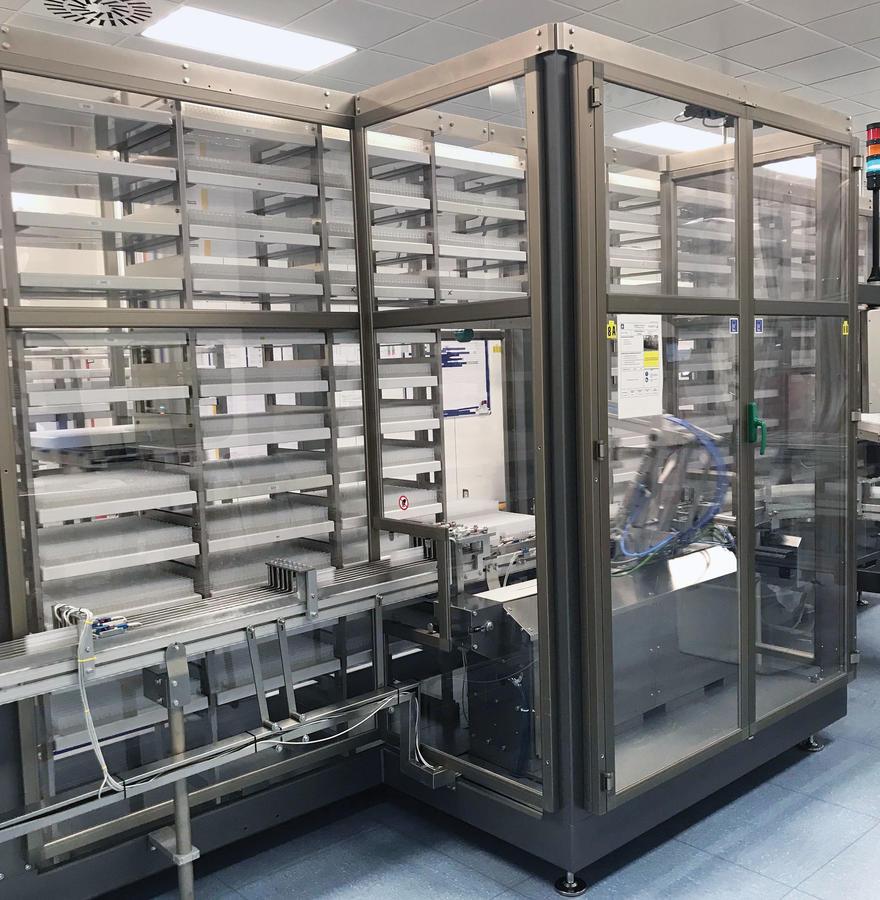 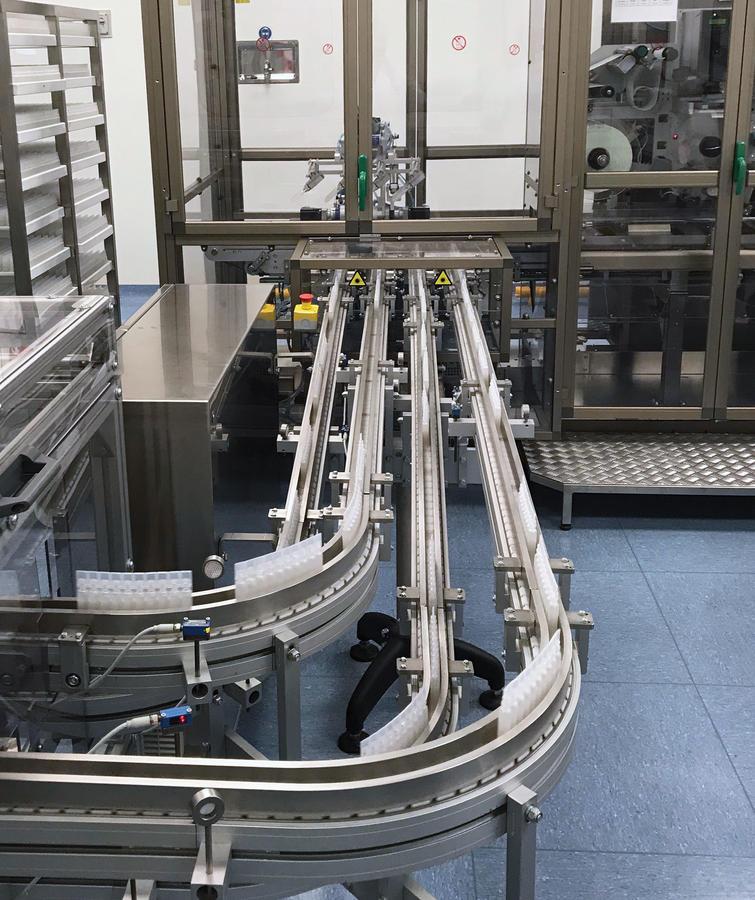 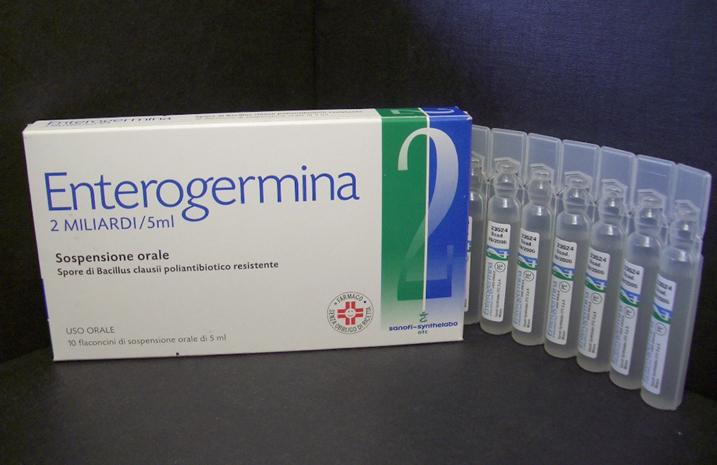 Among Paris-based Sanofi S.A’s more popular products is Enterogermina Oral Suspension, a probiotic used to treat diarrhea and other gastrointestinal problems. It’s sold in 73 countries (though not in the U.S.), and 58 of those markets are supplied by the Sanofi plant in Origgio, Italy, just outside Milan. That’s where four BFS BP 460 aseptic blow/fill/seal systems from Rommelag are producing 5-mL bottlepacks made of low-density polyethylene that feed into secondary and tertiary packaging equipment supplied primarily by Marchesini.

According to Luca Angelini, Technical & Information Services Manager at Sanofi, the Marchesini packaging line became necessary in 2016 when the third and fourth Rommelag systems were added. Soon, he adds, a fifth and sixth BFS BP 460 will be installed along with a new Marchesini line that will replace an existing packaging line that dates back to 2007. For now, the 2016 line accepts the output of all four Rommelag machines. Since each of these blow/fill/seal systems is capable of 20,000 individual bottlepacks/hr, the Marchesini equipment has to be mighty capable, to say the least. Helpful, as we’ll see in a minute, is a clever buffering system at the very beginning of the 2016 line, which is the line we’ll look at in this story.

The aseptically filled low-density polyethylene bottlepacks emerge from each Rommelag BFS BP 460 in a continuous belt and enter a Rommelag cutting device that separates them into strips of 10. These strips drop right side up onto a conveyor that leads to the Marchesini packaging line. So the 10-count strips of bottlepacks are in four parallel lanes as they reach the packaging line.

As long as all machines on the packaging line are running smoothly, a Marchesini Robocombi system automatically picks the strips of bottlepacks from the conveyors they stand in and places them directly into the four parallel conveyor lanes leading to the packaging line. But if any downstream packaging machines are paused for any reason, the incoming bottlepacks are instead loaded by the Robocombi into the trays of the Marchesini buffer system. As soon as the downstream equipment is back up and running, the buffer feeds the packaging line with the bottlepacks stored in it, following a FIFO logic. With blow/fill/seal operations, where any stoppage is problematic because it represents a halt not just in a filling system but in a combined extrusion/blow/fill operation, this buffering system makes an important contribution. By providing up to 45 minutes of accumulation, it helps to minimize instances where the upstream blow/fill/seal systems have to be halted due to downstream stoppages of any kind.

A short distance downstream from the buffer system is a Model DL200-2TA dual-head pressure-sensitive labeler from Neri, a Marchesini division. Because it has two application stations, there’s no need to stop production when it’s time to change label rolls.

Integrated into both application stations is a Novexx thermal-transfer printhead from Avery Dennison that prints product information as well as variable data such as lot number and expiration date on each label. Four SEA Vision cameras - two for one application station and two for the other- inspect for the presence and accuracy of the variable data. Near the machine exit is a fifth SEA Vision inspection camera to make sure the label itself is on straight and is not folded over on itself or otherwise compromised. Should there be anything wrong with either the printed data or the positioning of a label, that strip of bottlepacks is rejected from the line.

Label rolls hold blank, unprinted pressure-sensitive paper labels 10-across. A Marchesini Robocombi system with four arms picks four strips of bottlepacks coming from the four parallel infeed conveyors and lays them flat in the flights of the labeler’s infeed conveyor, one per flight. So as these strips proceed through the labeler, the individual 5-mL doses are lined up 10-across, and one pressure-sensitive label - freshly printed with variable information - is applied to each 5-mL container.

Next is cartoning on a continuous-motion Marchesini Model MA 357. At the discharge of the bottlepack labeler is another Marchesini Robocombi pick-and-place system with six arms that uses vacuum cups to pick labeled bottlepacks and place them into the buckets of a parallel conveyor leading into the cartoner. On the day of our visit to the Sanofi plant, 20-count cartons were in production, so two strips of 10-bottlepacks were being placed into each bucket. Running parallel to these buckets are two other conveyors. In one is an informational leaflet that is picked and positioned by a dispensing machine from GUK and in the other is an erected folding carton. Each strip of bottlepacks is pushed first into a leaflet, and then leaflet and bottlepack strip are both pushed into a carton. Carton flaps are then folded and heat sealed closed by a Nordson hot melt adhesive applicator.

In addition to producing cartons holding 20 of the 5-mL doses, the cartoner can easily be changed over to put one or three strips of bottlepacks in each carton, thus offering consumers 10, 20, or 30 of the 5-mL doses per carton. The operator simply selects the new carton quantity at the touch screen of the cartoner. As for speeds, when the 10-count carton is in production, the operating speed is about 200 cartons/min.

Actually there is one additional format, a carton containing just five of the 5-mL doses, which is especially popular in Latin America. “We developed with Marchesini, as a prototype really, a cutting device that was not available before,” says Angelini. It consists of a pneumatic device, located just ahead of the dual-head Neri labeling system, where the Robocombi picks the 10-dose strips. This device uses a pair of grippers to divide the 10-dose strip into two side-by-side 5-dose strips.

Included in the cartoner is a Marchesini Model BL A420-VTE pressure-sensitive labeler, and integrated into it are a number of marking, coding, and serialization technologies. Says Sanofi’s Angelini, “The standard for Sanofi is Wolke, Cognex, and Antares for serialization.” In other words, Antares Vision is responsible for the software that generates unique 2D data matrix codes, a Wolke digital thermal ink-jet printer from Videojet prints that code on the labels, and a Cognex camera inspects the unique codes.

At this point the cartons are ready for case packing and palletizing, which is handled by a Marchesini Model MCP 840 monoblock system. According to Angelini, an argument can be made that there are some advantages to installing a case packer that is entirely separate from the palletizer. But in this particular case, space constraints are an issue, which made the monoblock approach highly desirable. Compact and reliable, all of MCP 840’s operations are fully automated and performed by servo motors controlled by a Siemens 677 PC. First a corrugated case blank is picked and transferred to the opening unit by an arm equipped with vacuum cups. Cartons arrive on an infeed belt and are grouped before being vertically stacked and then pushed into the erected case. Chain conveyors transfer the case to the flap folding and taping station.

As for palletizing, it’s performed by the versatile Marchesini Gigacombi robot that allows the use of two palletizing stations simultaneously. So while one station is operating, the pallet can be changed in the other. Pallet wrapping, notes Angelini, is done in a centralized location a short distance from the case packer/palletizer monoblock.

At this point, says Angelini, while the marketplace requires unique serialized codes on each carton, it does not call for unique codes aggregating cartons with cases or cases with pallets by creating parent/child relationships. Market forecasts suggest, however, that aggregation may be a requirement at some point in time. So the case packer/palletizer monoblock was designed so that both marking or coding or labeling systems as well as the necessary machine vision inspection devices can be readily put in place.